Fly fishers always look for a good excuse to go fishing. And when the word gets out that the aquatic insects are getting ready to hatch, what fly fisher wouldn’t head out to the river to enjoy it? This was the year of the great cicada hatch here in the Midwest. You know, the one that only comes around every 14 years.  Well, we thought, like everyone else, that these giant cicadas would drive the trout into a feeding frenzy.  And we were going to be ready for it!

So, a bunch in our group bought $3 – $4 cicada fly imitations from the local fly shop.  But I decided I would tie my own version of this fly and it would be better than anything that a fly shop had to offer. I picked up some foam material and screen/mesh ribbon and proceeded to tie 5 or 6 cicada flies.  I put them in a small round clear plastic container and jammed it into an inside pocket in my fly vest. And that’s where those flies stayed for most of the summer – jammed in the inside pocket of my fly vest.

It was always my job to take the new guys out on the waters to teach them the finer points of fly fishing.  But on this summer day, this trip would be different.  There were four of us, all seasoned fly fishers with several years of experience.  I was going to enjoy this day of fly fishing – no teaching, just fishing.

We arrived at the river around 8am after a long two-hour drive from the big city.  The river was the perfect depth and flow this day. We were all excited as we cackled like a bunch of hens.  “What flies should we use today? Think there will be any hatches? How about a bet on the biggest fish?”.  Waders and boots went on and rods and reels were adjusted.  We felt like gladiators going out to do battle!

As we entered the river we each took up our positions.  The water was cold and clear with boulders strategically placed throughout the runs and riffles.  Fishing was good.  Every so often you could hear one of the guys yell out, “fish on!”.  Followed by a “Yahoo!”.  We caught rainbows and browns throughout the morning hours.  We were in awe of the colors on each trout we caught.  We regrouped for lunch and laughed and chatted about the catches we made this morning.  With lunch complete, we again attacked the river for the afternoon.

Two hours passed and there were very little “fish on” or “yahoos” being heard.  The fishing just shut down – completely.  I noticed that Mike was changing out flies and I asked him what he was going with next.  He said he was going to try a Cicada fly that he purchased earlier this summer.  Holy cow, I had forgotten about the ‘beautifully’ tied cicada flies that I had in my fly vest!  Feeling for the inside pocket of my fly vest the plastic container loaded with my cicada flies was still there.  I decided to do the same.

Pulling out my flies I couldn’t help but brag aloud on how good my cicada flies looked.  So, Mike and the two others fishing with us had to come over to take a peak.  Suddenly there was a roar of laughter!  “Those are the most, butt ugly flies that I have ever seen,” said one of them.  “It looks like a black piece of foam with a screen door on its back,” said another.  I was crushed.  I will show them! I will lay out a perfect cast, allowing the fly to flutter down, sitting upright upon landing on the clear water, and watch it ever so seductively float down the swift current calling for a jumbo trout to suck it in.

I tied it on and with several beautiful false casts I laid the cicada fly out with precision.  It fluttered down ever so life like to the water and immediately – flipped over onto its side.  Laughter erupted, and I was demoralized as I watched my “butt, ugly fly” float almost upside down through the riffle. But suddenly from nowhere came the most beautiful rainbow trout I have ever seen.  It didn’t attack the fly. It came straight up from the bottom and sucked it in.  I stood there watching in amazement until something screamed inside of me – “Set the Hook!!”  My rod tip shot up and the fight was on.  The rainbow jumped several times, twisting, and turning on each jump.  Now I could hear cheers as I got to yell “fish on!”.  It took several minutes to bring it in close.  Mike asked if he could help and I gladly gave him the job to net it. A couple more runs by the rainbow and it was finished and in the net.  It was beautiful! How could something so beautiful be fooled by something so “butt ugly”.   Cameras came out and smiles all around.  No one was laughing after they saw my 19” rainbow. 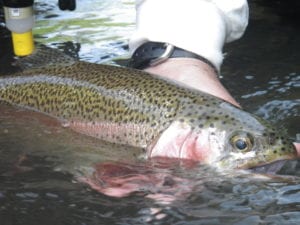 I retired that fly.  Guess I won’t need it for another 14 years.  Oh yeah, just to show you it’s a true story here is a picture of my rainbow.  Beauty, isn’t it?