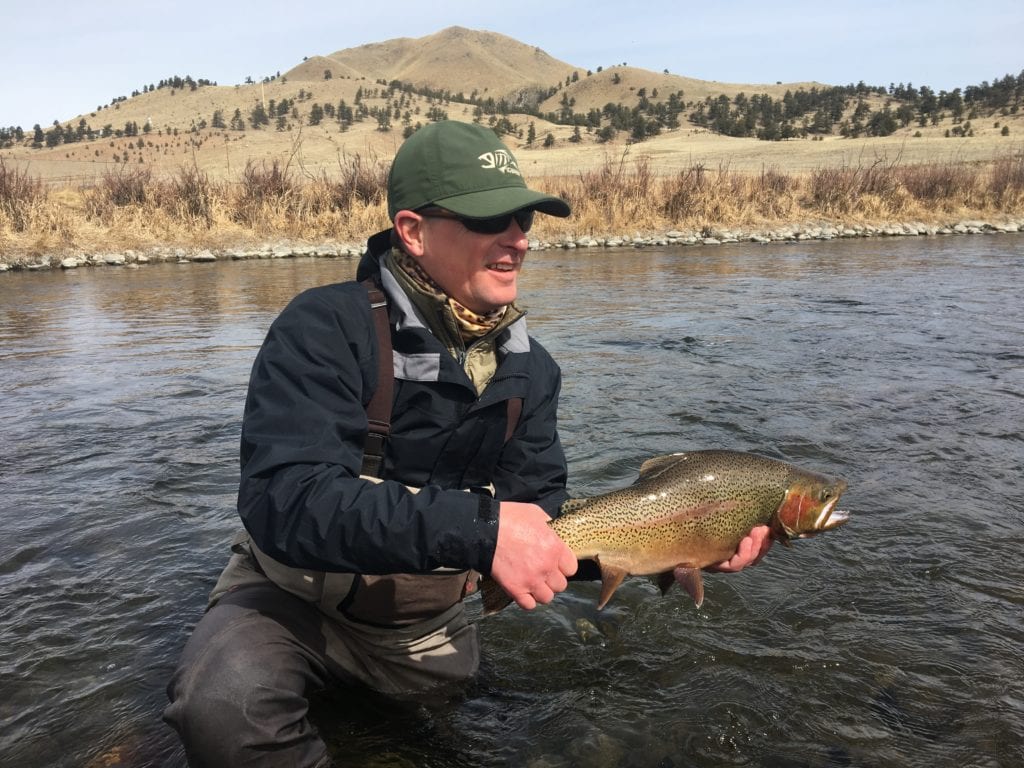 I have had a lot of discussions lately relating to rod position when fighting big fish.

We all see the pictures of the guy in the fly-fishing catalog with the fancy waders, awesome colorful jacket (that’s another topic) and his rod held straight up in the air fighting a huge trout. It makes a great picture but unfortunately, it’s not the way to fight a fish – especially a big fish.  The rod position is very important in tiring and bringing in that fish of a lifetime or any fish for that matter.

Let me clarify something.  When a guide or instructor says get the tip up, he really means keep the pressure on the fish.  If your rod goes “straight” (i.e. no bend in the rod) while fighting a fish, then you have lost the pressure on the fish and expect to lose the fish shortly.  Getting the tip up doesn’t mean to fight your fish with your rod in the 12 o’clock position.  This can be a great way to break your rod fighting a big fish and is not putting very much pressure on a big fish to tire him out.  Let me explain…

When you fight a fish with your rod up in the twelve or eleven o’clock position you are only bending (using) about 1/3 of the rod.  This puts very little pressure or force on the fish. Tests have shown in most cases less than 1 lb. of force, not enough to tire out a big fish.  Also, if the fish runs towards you, you have very little time to strip in or reel in line to keep pressure on the fish. And he’s gone. So, fighting a big fish in this manner gives the fish and not you an advantage.  With your rod tip high it raises the head of the fish and could force him to jump which again gives the fish the advantage to spit the hook.

Fighting a big fish try your best to get all your line on your reel. Getting all your line on the reel allows you to fight a bigfish with the help of the reel’s drag system. Now if you point your rod right at the fish, he is now fighting the reel drag. In other words, the pressure on the fish is provided solely by your drag. Tighten your drag to 6 lbs. of pressure then the fish will have 6 lbs. of pressure tiring him out. But if he shakes his head or can create a small amount of slack in the line, a good tug can break your line because there is no give to the fly line. And he’s gone.  As a note, most good 5 wt. reels average around 7-10 lbs. of max drag (see 5 wt reel Yellowstone shootout for 2016 online).

Fighting a fish with your rod in about the 45-degree position allows you to put more pressure on your fish and use the rod for it’s shock absorber qualities.  This will achieve a few things. One, the fish will be pulling drag off the reel in nearly a direct manner resulting in only the pressure of the drag on the fish with no extra force being exerted onto the hook by the rod or angler. It also allows the drag on the reel to work at close to max drag if you have it tightened down (the tightness of drag should be commensurate with the strength of the tippet you are using). The slight bend in the rod will provide just enough shock absorption and tippet protection from any abrupt jolts or head shakes by the fish.  If the fish runs away from you, you can release line by lowering your rod tip. If the fish runs toward you, you can strip or reel in your line fast enough to keep the pressure on the fish by raising your rod tip.  Once either of these two scenarios happen then get your rod back to the 45-degree position to continue tiring out the fish.  Once he is ready then you can bring your rod up to bring the fish to the net.

This diagram shows how you use the “entire” rod from tip to butt section when fighting a fish in the 45 degree or 2 o’clock position.  You pay a lot for a good rod, so you might as well use it to its full capacity.

So, to summarize these tips for fighting a big fish:

When I caught my huge rainbow in the Dream Stream last March (2018), I was amazed on how much pressure I could put on the trout with 5X tippet and a size 22 fly.  With the line on my reel (using my drag which was set before fishing), a 45-degree rod position and doing my best to be perpendicular to the fish, I was able to bring this big fish to the net.